Posted on September 14, 2013 by thewoodlander 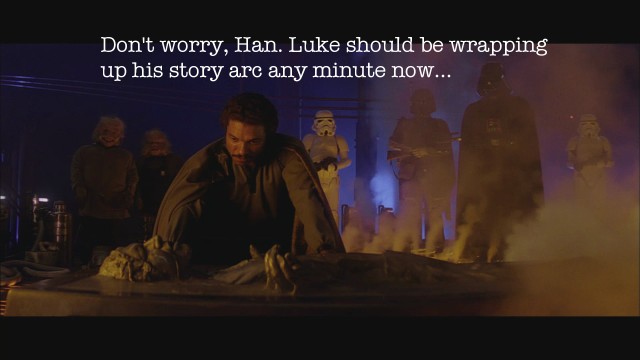 I’ve written about plotting before, but over the past year my thoughts on the subject have evolved, so I thought I would revisit it.

When I first started writing The Woodlander, I was firmly in the “just wing it” camp. the main reason being I wanted to avoid the dreaded “paralysis-by-analysis” effect, where if I didn’t plan out every last detail ahead of time, I wouldn’t even be able to start writing. Far better, I thought, to just jump in and let the plot come naturally.

Fortunately, the plot did come to me, but that process (or lack thereof) also resulted in some substantial rewrites and edits! There were dead ends that had to be scrapped, new ideas that had to be seamlessly worked back in, themes that needed developing, and so forth.

Because of this, my first book took much longer to complete than I had anticipated. I’m very happy with the end result, but it’s clear that I need to write much faster if I want to put out a steady stream of books. (Not coincidentally, I think the primary key to discoverability is having a large collection of work available, so speed is of the essence.)

Still, there remains the problem of working out the entire plot before you even begin. For instance, as I wrote The Woodlander, I really didn’t know what was going to happen to poor John Grey, and even if I had tried to plot out the details ahead of time, I was worried that it would come out forced and contrived.

So, with this in mind, I’ve taken a hybrid approach to plotting with the sequel Grimm & Grey. It’s split into two story arcs: one involving John Grey and his continued quest from the first book, and the other following Lisa as she begins to attend classes at snooty Langley Prep, all the while learning she can’t hide from her past (read this last part in dramatic movie-announcer voice).

The first arc is very much in the vein of The Woodlander, an epic adventure with over-the-top action. I’ve already completed this arc, and I wrote it much like I did the first book – making it up as I go. Of course, along the way I had some some general idea of what was going to happen, but for the most part I just let it rip. I like writing in this fashion – it’s very liberating, and it gives you an opportunity to surprise yourself!

That’s all good and well, but now I had to write the second arc involving Lisa. This one is interwoven with the first through alternating chapters, so it was clear some planning would be necessary. Passage of time, for instance, needs to be consistent. I can’t have weeks pass by for John Grey in one chapter while mere hours pass for Lisa in the next. The two need to intertwine tightly, and come back together in a satisfying conclusion.

As trite as it might sound, I think the original Star Wars movies are a great model for this. Particularly The Empire Strikes Back, where we follow Luke on his quest to become a Jedi while simultaneously following Han and Leia as they run from the Empire. The two arcs come back together in a satisfying (if tragic) conclusion, with the gang reunited at the end (albeit sans Luke’s hand and Han’s carbonite-encased body).

One of the great advantages of this dual-arc approach is each story can have a different style and feel. Can you imagine an entire movie of just Luke learning to be a Jedi? It would be great for a little while, but how many objects do we need to see him levitate before we get the idea? As a stand-alone concept, it’s not nearly as interesting, but when you simultaneously have Luke’s friends getting captured by Vader, and suddenly Luke has to abandon his training to try and save them… well, now I have to know what happens next!

The challenge is getting these two arcs to come back together seamlessly. To that end, I have begun using Scrivener’s outlining features:

Scrivener allows you to create a synopsis for each chapter and lay them out as notecards on a virtual cork board. You can then drag the cards around to reorder events as you like. I’m finding this feature extremely useful as I try to integrate Lisa’s story arc around John’s.

As I stated before, John’s half of the book is already complete. For each chapter in this arc, I created a notecard containing a synopsis of that chapter. I then placed blank notecards in between the existing ones to start plotting out Lisa’s own adventure.

The advantage here is I know exactly how many new chapters I need to write, how much time needs to pass in each chapter, and when I need to start wrapping things up to bring everything back together. I have to say, if I was just winging this part of the book, it would probably come out a mess, requiring extensive rewrites to blend it all back in!

So if nothing else, I’m hoping this new plotting process will eliminate a lot of editing, allowing me to get the book out faster. But there has been an additional benefit I hadn’t anticipated:

When you see the plot laid out on notecards, lulls in the story are revealed. Over the last year, I’ve become a firm believer in “always raising the stakes,” so it’s easy to see when a chapter ends without a compelling reason to go to the next. I’m not saying every chapter needs to be a nail-biting cliffhanger, but they should each leave the reader wanting more.

For example, I noticed a few chapters in Grimm & Grey that left me saying, “Well, that’s all very pleasant, but who cares? I just want to know what happens next!” While others are so chock-full of twists and turns that they could easily be broken into multiple chapters. By splitting/combining these, I should be able to make each more compelling in turn.

This is the sort of thing that’s hard to spot without an outline view. As much as it pains me to say it, creating a synopsis of each chapter is looking more and more like the smart thing to do. It really gives you a perspective on your work that’s hard to reproduce when you’re down in the weeds of your own prose.

Now, whether you create that synopsis before you’ve written a single paragraph or after you’ve completed the entire book is up to you. For me, I’m doing a little of both.

Kirk Watson is the author of The Grey Tales series of novels featuring squirrel-of-action John Grey. He resides in Austin, Texas.
View all posts by thewoodlander →
This entry was posted in Writing and tagged fiction, self-publishing, writing, writing novel fiction. Bookmark the permalink.